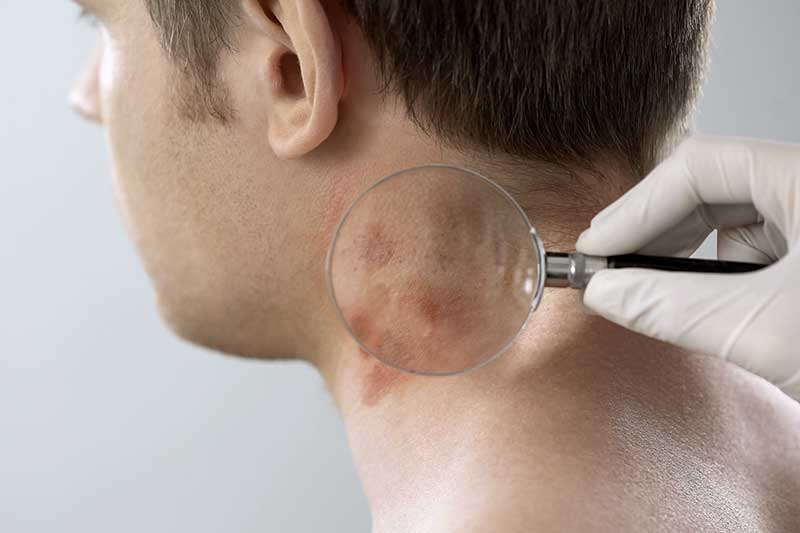 Fungal infections are skin diseases that are caused due to the growth of fungus on the skin. These are of several varieties depending on the type of fungi that has infected your skin. Fungal infections could be the reason behind skin problems such as irritation, scaly skin, blisters, redness, itching, swelling or more. Today, let’s take a look at the various types of fungal infections and ways in which you can prevent them.

Jock Itch or tinea cruris is a fungal infection that is caused due to fungi called tinea. These fungi generally infect moist areas of the skin such as inner thighs and genital area, leading to ring-shaped itchy rash and redness. It occurs mostly during the summers or warm climate.  The infection could be mildly contagious if the fungi get transferred to the other person due to direct contact or by touching common objects. Other symptoms of Jock itch include cracking, flaking and peeling of skin.

Jock itch condition is treated by the application of Antifungal Dusting Powder or creams as prescribed by the doctor after analysing the severity of the infection. Always keep your skin dry after a bath with a clean towel. Also, you must always wash and change your clothes and innerwear regularly.

The name Ringworm may wrongly suggest that it is a worm, but that’s not the case. Ringworm or tinea corporis is a type of fungal skin infection which is named so due to the ring-shaped rash that it causes with a worm-like edge. Like Jock itch, they can be contagious too due to direct or indirect contact. In this type of skin infection, circular, flat and red sore starts developing along with scaly skin. The outer side is generally raised like a ring, while the inner area looks to be normal. In certain cases, many red rings may overlap each other in the infected area. The doctor may prescribe Antifungal Dusting Powder like Flucos in such conditions or creams and oral medication, based on his observation and analysis of the infection.

Also known as tinea pedis, Athlete’s foot is an infection that effects the foot area. They are caused due to fungi such as Trichophyton rubrum. Warm and humid places such as shoes, socks etc. are very conducive for the growth of fungi. People who wear tight shoes or continue wearing sweaty socks for several days even in the summer are more prone to Athlete’s Foot. Not keeping the skin dry after using the pool or public bath may also lead to this condition.

In this type of fungal infection, the fungi thrive on the dead tissue of toenails, exterior layers of skin or the hair. The general symptoms of Athlete’s Foot include burning, itching and redness. In some cases, they may occur between two toes and spread to the foot’s sole. At other times, the condition may start with dryness and itching which gradually leads to the development of thick skin and cracks across the sole and the sides of the foot. In rare cases, it may start with puss-filled blisters mostly under the foot, between the toes or in the heels. The doctor may prescribe an Antifungal Dusting Powder to fight the fungal infection or medicines to be consumed, depending on the severity of the condition. To prevent the Athlete’s foot condition, one must always keep their feet dry, wear comfortable shoes that are airy, wash the foot with soap and water and avoid wearing sweaty socks.

The scientific term for yeast infection is cutaneous candidiasis and it is caused due to fungi named candida. Unlike the other infections mentioned above, they are not contagious. The candida fungi infests moist, warm and folded areas of your body like the groin area and armpits. It is also commonly found in infants in the form of diaper rash. In some cases, it also infects the nails, vagina or even the mouth. People who suffer from this kind of condition, experience symptoms such as rash, pimple or boils, burning, pain and even pus. It could also lead to the formation of white or yellow nail which remains detached from the nail bed. When the yeast infection affects the mouth area, it’s called as thrush, leading to patches inside the cheeks and pain. The yeast infection could also infect the vagina, leading to the discharge of yellow fluid, itching, burning or redness outside the area. The treatment of this condition varies depending on the type of Yeast infection or the infected area. Medicated creams are used to treat most of the yeast infections of the skin. Medicated mouthwash may be prescribed by the doctor if it’s Oral Thrush, medicated suppositories are suggested for vaginal infection, in some cases, anti-yeast medications to be taken by the mouth can also be prescribed.  Flucos Dusting Powder has the right formulation that absorbs excess sweat or moisture accumulated on the skin. It also prevents the further growth of fungi on the skin, thus helping you live fungal free. For any kind of fungal infection, hygiene is one of the most important factors that should never be overlooked. By keeping every area of your body, dry and clean minimises the chances of fungal infections to a great extent. Apart from that, it is also important to wash your clothes and socks regularly. Never wait for the condition to become worse and seek medical advice at the earliest from a good doctor or dermatologist for faster recovery.